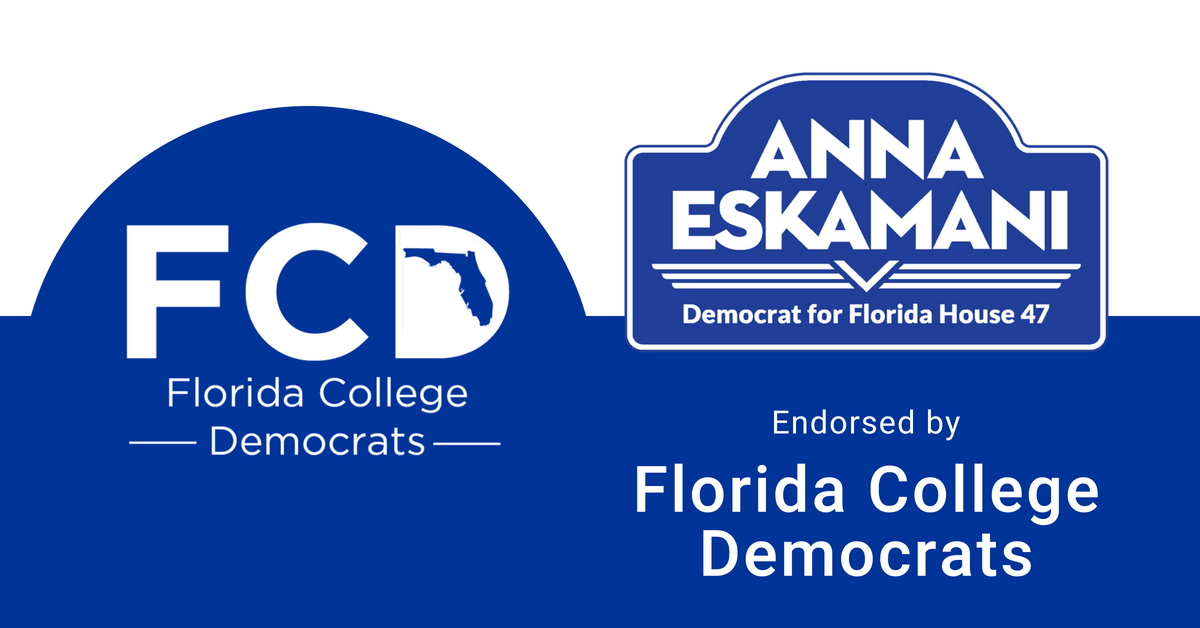 The Florida College Democrats (FCD) release their slate of candidate endorsements. Anna was one of those candidates, and you can see FCD’s full press release below.

Anna Eskamani- HD47 – We are proud to endorse Anna Eskamani for House District 47, a former College Democrat member who helped rebuild our organization in 2010. We are proud to endorse Anna for her tireless efforts for healthcare, women’s rights and LGBTQ rights. Anna recently received an endorsement from former candidate for President, Governor Martin O’Malley and was featured on the TIME magazine cover ‘The Avengers.’ Eskamani is young, motivated and ready to bring much needed progressive change to Florida.

Margaret Good- HD72 – We are proud to endorse Margaret Good for House District 72 for her work for Democratic values as a dedicated politician and lawyer. Good is an advocate for important issues, such as environmental rights and women’s rights. Good cares deeply about education in this great state of Florida. Good plans to uphold these values and to ‘shake up’ Tallahassee.

Mark Lipton- HD79 – We are proud to endorse Mark Lipton for House District 79, who is a supporter of public education, even referring to it as a “backbone” of this country. Lipton believes affordable health care is a right, which is an important issue to Florida College Democrats. Lipton upholds Democratic values and plans to unfold his vision for a better Florida.

Sanjay Patel-CD8 – We are proud to endorse Sanjay Patel for Congressional District 8. Patel is a dedicated grassroots activist and has helped Brevard Dems rise to the ranks as one of the biggest grassroots organizations in the state. Brevard Dems knocked the most doors in any county of Florida and fundraising doubled under the Sanjay and Stacey Patel leadership of Brevard Dems. Patel is a fighter for progressive values and really shows his message of ‘People over Politics. Patel was endorsed recently by Our Revolution.’