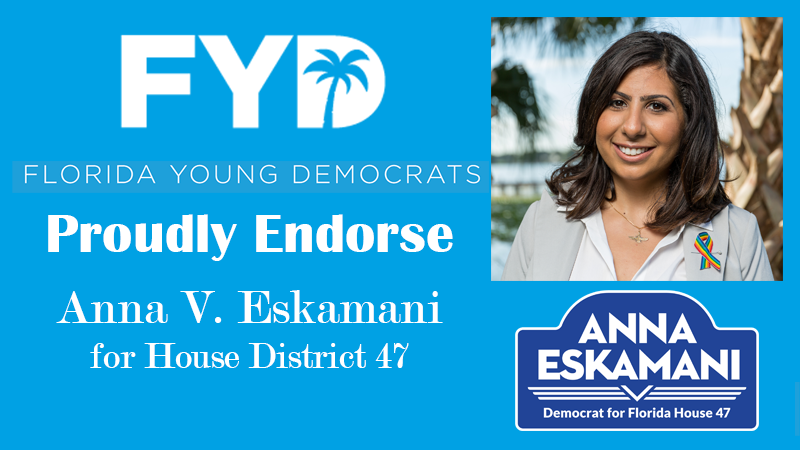 “Our priorities in races were trying to support young people and trying to support candidates who had messages that support young people. We’re endorsing our own,” said Florida Young Democrats President Jake Sanders. “We want to make sure that people who speak to youth issues get recognized for it. Anna V. Eskamani is dedicated to securing the future of the Florida Democratic Party, and exemplifies our mission of providing county chapters with resources to build stronger young voters. She has dedicated her career to ensuring the education and turnout of youth in local, state, and national elections.”

Anna V. Eskamani is lifelong Orlando Native and daughter of immigrant parents who has worked relentlessly her entire life to protect all members of our community through effective advocacy, bold leadership, and strategic management. A community organizer with a proven track record in building consensus while fighting unapologetically for progressive values, Anna currently serves as the Senior Director of Public Affairs and Communications for Planned Parenthood of Southwest and Central Florida.* She manages a team across 22 counties and is known in the legislature and across the nation as an advocate for women’s health and equality. Anna is also a PhD student in Public Affairs at the University of Central Florida and serves as an Adjunct Professor teaching Intro to Women’s Studies. Tough, authentic and unafraid, Anna is a progressive who has proven herself as a leader who works hard, delivers results, and gets things done.

So far, Anna has earned the endorsement of over 40 community leaders and organizations, including an early endorsement from Orlando Mayor Buddy Dyer. She was also one of the 48 women featured on the cover of Time magazine. When elected, Anna will be the first Iranian-American to serve in the Florida legislature.

*Provided for biographical purposes only