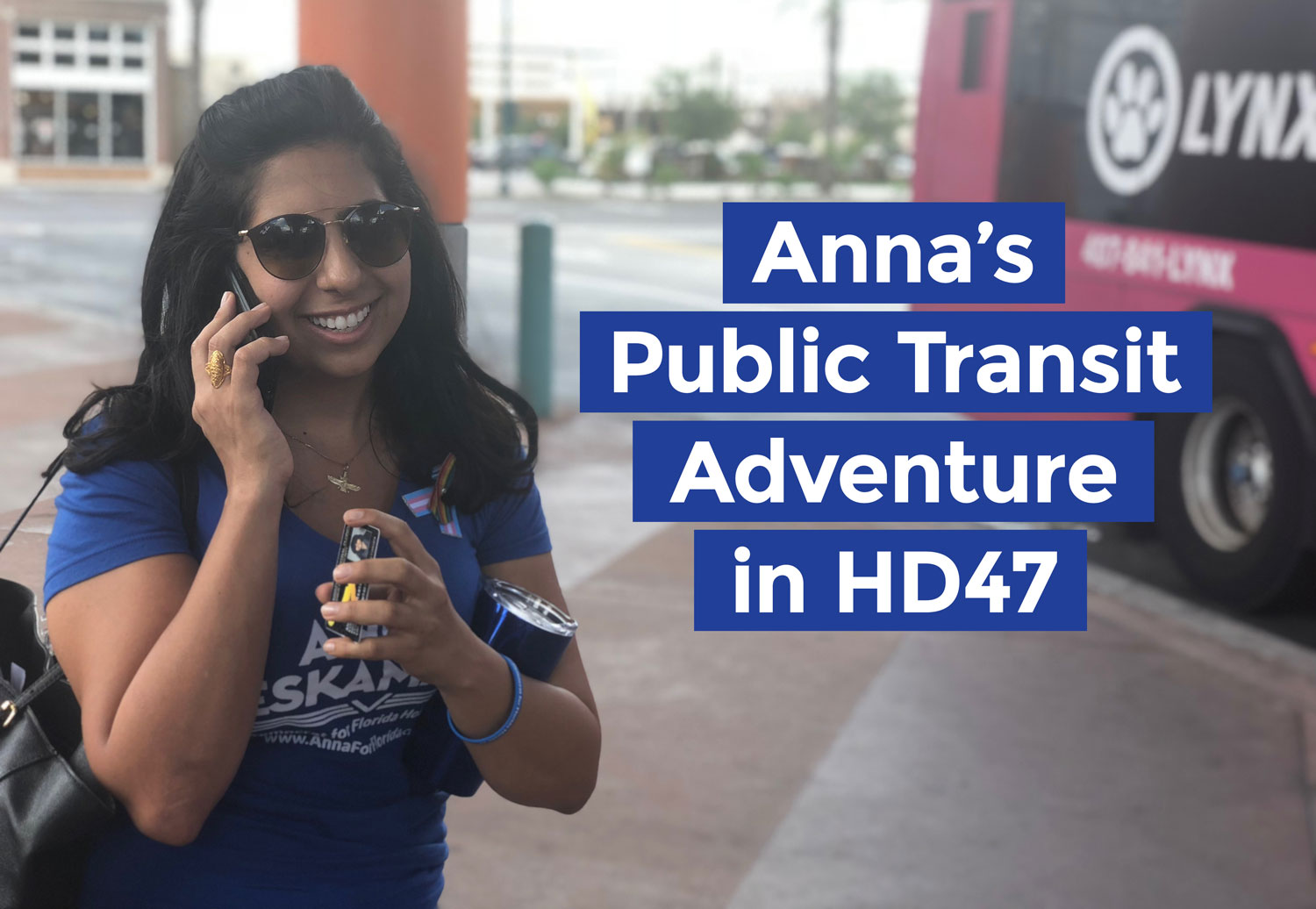 Four weeks ago I went on a public transit adventure in House District 47.

Learn first hand how public transit works and doesn’t work in our district, and uncover solutions for us to be a national leader on connectivity and mobility.

As an Orlando native I’ve always known that traveling around Central Florida without a car is nearly impossible. In fact, one day after school in 10th grade, my sister and I didn’t have a ride home and so we walked a solid two hours down Highway 50. By the time we got to our house we were drenched in sweat, exhausted, and ready to never do that again.

Unfortunately for Floridians across our state, lacking access to a car is a common barrier to achieving economic mobility and accessing basic needs, like food, school, and health care.

In fact, commuting time has emerged as the single strongest factor in the odds of escaping poverty. According to a 2015 study, the longer an average commute in a given county, the worse the chances of low-income families there moving up the ladder. The connection in places with notoriously long commutes and poverty include Atlanta, Boston, Dallas, Denver, Los Angeles, New York, Birmingham, and you guessed it — Orlando.

Public transit is a priority for me and our campaign. I feel firmly in the power of accessible and affordable public transit as a means to move people and ideas. I see it as a way for us to desegregate poverty, cut down on traffic, and be more environmentally friendly.

So on August 6th, myself and my good friend David Thomas Moran embarked on a public transit adventure. Full disclosure: David is a public transportation expert and entrepreneur. He is actually the co-founder of a startup called Omnimodal, and served as my guide for the day.

David and I had one simple goal: travel from Orlando to Winter Park by 11:00am, and then return back to Orlando — all with the use of public transit. This could include walking on sidewalks, riding bikes, taking the bus, and/or SunRail.

So we began our journey in Thornton Park, and made our way to the closest Lynx bus stop off Robinson Street, with the hope of taking the bus to Lynx Central Station, where we would then hop on Sunrail to Winter Park. Sounds pretty simple, right?

Well — we missed our first bus. Which for us wasn’t good, but it wasn’t the worst case scenario.

David and I are both able-bodied people, trying to get to Winter Park without a major deadline. Missing the bus for a working mom, or an aging adult, or a person with a disability (some folks are all of the above) is something very, very different. Putting yourself in the shoes of those who rely 100% on public transit to get by helps us understand again, why these resources are so important. ADA and Title IX compliance are both major driving forces in some of the system design and service needs, too (as they should be!).

As we walked there, we passed a Juice Bike Share rack off Orange Avenue. Again, another alternative for those traveling around parts of Downtown Orlando, but a Juice Bike can only take you so far, and only if you’re able-bodied too.

David and I began walking fast to Lynx Central Station, because the moment we arrived was also the moment that SunRail had arrived! We quickly tried to purchase our tickets, but as we tried to make payment the train came in, and then left! The scene was honestly quite dramatic, and it left us with two options: wait another hour for the next train, or find the bus to Winter Park.

With David leading the way, we hopped onto Lynx Bus Route 102, which brought us directly to Winter Park Station. The Lynx bus was easy, well air-conditioned, clean, and filled with everyday Central Floridians. Though there are no outlets to charge up, it was a space where we could relax, share company with others, and get work done — especially when compared to being stuck in traffic in your car, or walking along a busy street.

Once we arrived at Winter Park Station, David and I were proactive this time in purchasing our SunRail tickets to get back to Orlando. The schedule for SunRail was easy to follow, and they had just started their routes to Osceola County too. If you are a frequent SunRail user, you can purchase a SunCard, but in our case we purchased two one-way tickets back to Lynx Central Station.

David and I had a quick catch up lunch session with a sweet friend of ours (shout out to Mon Petit Cheri Café on Park Avenue where we stopped by!) and then headed back to catch SunRail. The experience on SunRail was fantastic — chargers, tables, air conditioning, WiFi. We got back to Orlando quickly, and then took one final bus to Mills Avenue where we walked the rest of the route home.

Our public transit adventure in House District 47 lifted up a few key points for me, points that I’ll share below:

Safety and public transit is another area of importance for us to lift up. The National Safety Council estimates that taking the bus is 170 times safer than traveling by automobile. Yet, we know accidents happen, on the train and off the train. It’s important that we practice safety and have strong protections in place for our commuter systems.

And there is the question of how we pay for public transit. It’s important to note that public transit almost always has some sort of fee for the passenger. That is definitely the case in Central Florida, except there are exceptions and discounts made for specific groups of people.

Recently there has been a rise in local responsibility paying for transportation infrastructure. For a State House Lawmaker like myself, that means two things:

None of these questions yield simple answers. But our public transit adventure in House District 47 has given me a deeper understanding of how public transit works and doesn’t work in our community, and I am excited to work alongside other stakeholders in finding solutions that better connect the great people, of our great state.